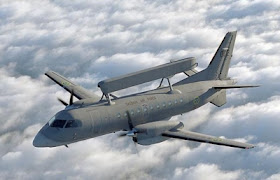 South Africa may include an airborne early warning (AEW) aircraft requirement in a package of defence contracts for economic exclusion zone (EEZ) security and peacekeeping operations being scoped by the South African National Defence Force (SANDF).

The AEW requirement could incorporate maritime surface and land target surveillance roles, with the system to be used in homeland security and direct military roles.

The potential project is seen as having close parallels to Brazil's Surveillance of the Amazon (SIVAM) initiative, with the Saab Microwave Systems Erieye radar looked at by the SANDF and the South African defence ministry.

It is also being driven by South Africa's commitment to provide comprehensive security arrangements as a condition of hosting the football World Cup in 2010.

Saab briefed the MoD in Cape Town on 19 September. The company also held discussions with South African defence minister Mosiua Lekota at the Africa Aerospace and Defence show on 21 September. The Brazilian air force deployed one of its Erieye-equipped Embraer EMB-145 AEW aircraft to South Africa to participate in the show.

Progressing the AEW requirement "is a question of what are their priorities and what financing they are ready to give this", says Saab executive vice-president Ken-Ake Jonsson. "There is definitely a need for it, but at the end it is a question of money."

The project may also see the acquisition of multirole landing ships capable of helicopter operations. The peacekeeping equipment package should be supported by South Africa's acquisition of eight Airbus Military A400M transports.